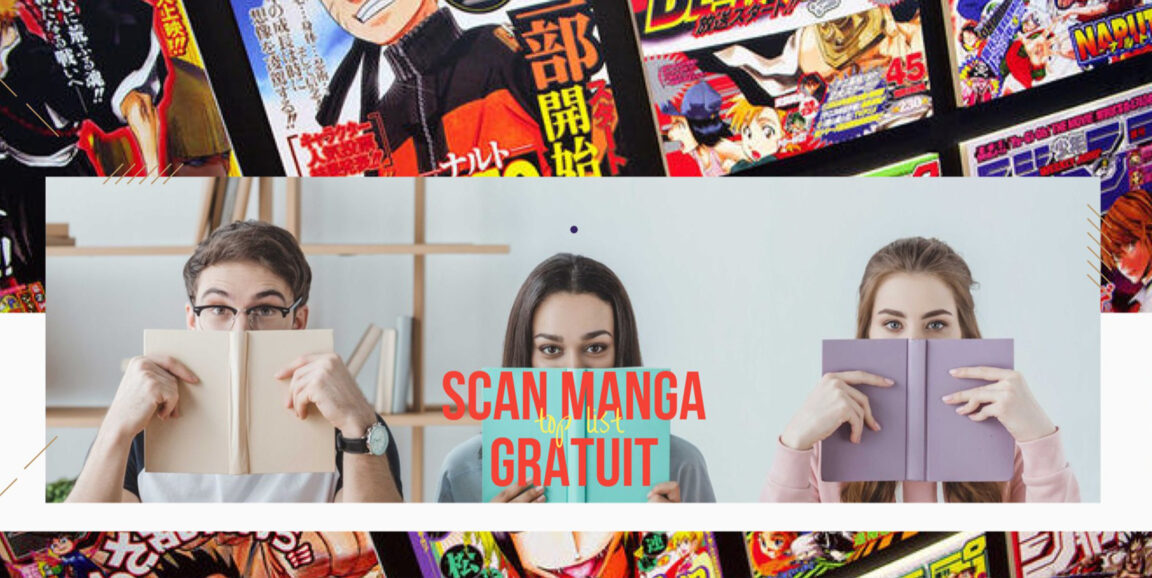 Top Free Manga Scan Sites: Where to read free manga scans? This is one of the most popular questions among fans of manga and anime these days.

Indeed, there are several free manga scanning sites on the internet, but the problem is that most of these sites change their address and name frequently and each scanning site offers a unique set of languages ​​and dubbing, which makes the task of researching and find the best free manga scan sites quite difficult.

Fortunately, in this article I have put together for you the complete list of the top 40 best free Manga scan online reading sites to read manga scans in French for free and without subscription.

The world of Japanese animation, called anime, has seen its popularity increase over the years, as has its graphic novel counterpart, the manga. Almost all anime usually start with a manga before getting their own series.

So, if you are a fan of it but are strapped for cash to buy new books, there are some great manga reading sites online to read your favorite manga digitally.

Indeed the best sites to read online Scan Manga sites listed below make it easy to find popular manga or discover lesser-known series that might interest you.

A scanlation, sometimes also referred to as scanslation, scantrad, or mangascan, refers to a manga that has been digitized (scanned) and translated by fans from its original language (usually Japanese, Korean, or Chinese) to another.

Besides, using these free manga scanning sites is simple and similar for the most part. Each manga has a detailed file: author, status, user rating and story summary. You will have the possibility to open the manga file, to put it in favorites or to download it, in order to consult it later, offline.

Although most of the sites on our list have VF (French) manga scans, scan readers on their platforms generally have multiple languages, namely:

Indeed, learning a language is never an easy task when it is not our mother tongue and without receiving beginner lessons. Learning the Japanese language is not the easiest thing: unlike English or Spanish, Japanese is one of those foreign languages ​​that is difficult to master. But reading the Scan manga in French and Japanese for example (dubbing), can serve as an intermediary for foreigners to understand the Japanese language!

In addition, each manga scan is categorized; action, comedy, fantasy, shounen, sci-fi, school life, ecchi, supernatural, drama, etc. and you will be able to choose thanks to the search function, according to your personal preferences.

The manga on these sites are uploaded through high quality scans, allowing anyone to access them. It's a great way to keep up to date with your favorite shows on the day of release.

Finally, you can install a AdBlock on your browser before visiting these sites, we know very well that the advertisements present on most of the Anime Streaming Sites et direct download sites are troublesome.

We must admit, however, that we have mainly taken into consideration the most reliable and reputable sites.

Any avid reader of Japanese manga comics knows that it is not easy to tell the difference between official translations and translations made by fans. This explains why most of us look for the latest information and addresses of best sites to read manga online for free.

If you are reading this article, you must be a manga lover looking for the best places to read manga scans in VF or other languages. The sites below are classified according to the following criteria:

We let you discover the complete list of the Best Scan Manga Sites in 2021:

The list of best free manga scan sites is updated every month, save the page to your favorites?

Note that we have already published an article which is devoted only to best One Piece scan readers, then if you like the OP manga we invite you to consult the ranking.

Manga vs. Anime and Playback Formats

Strictly following Japanese tradition, manga scans are read from right to left. Texts and descriptions are also designed to be read in the same way. This format is quite the opposite of that found in Native American comics.

When published, manga are normally put together in small volumes or larger volumes if they are popular, which exhibit great diversity across different genres. For example :

Unlike American comics which target a young audience, the manga is a comic book for everyone, regardless of age, gender, and preferences.

It should be noted that a lot of effort has gone into making the manga look and feel American just like the American comics, but manga artists have opposed it as they seek to preserve their rich culture and unique, both at home and abroad.

In this regard, the public and manga fans have ensured that manga produced elsewhere, such as in the United States, is in the traditional Japanese style.

The rise of Japanese comics and manga

The manga has its origins in emaki, first illustrated narrative scrolls dating from the time of Nara to 8e century and Ehon, ukyo-e print books from the Edo period.

In 1955, editions multiplied and comic bookstores developed in Japan. Yes the manga market is booming, it is criticized for being a little childish.

Two years later, a new style reflecting darker realities and aimed at young adults was born. This is the gekiga manga invented by Tatsumi Yoshihiro.

The manga universe is diversifying and the phenomenon reaches its peak at the end of the 20e century through massive distribution. The subjects and styles are particularly varied and the prices always very modest.

Finally, manga are commonly adapted into cartoons, the most famous of which are Akira, Dragon Ball and the animated films of famous Hayao Myazaki such as Princess mononoke ou My neighbor Totoro.

Since the 2000s, the manga market has represented a major part of the publishing industry and contributes significantly to the economy of Japan.