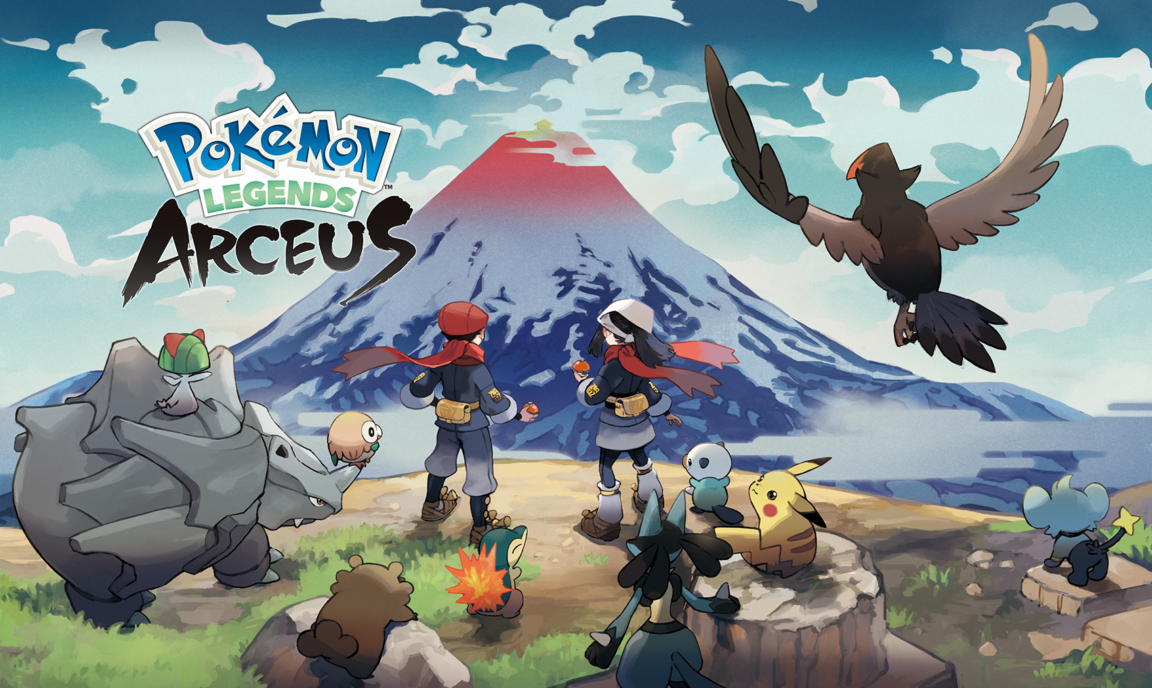 An episode that changes everything! Pokemon Legends: Arceus presents itself as the revival of the series on all points, in the story as the fights. We explain all this to you.

Pokémon Legends: Arceus is a 2022 action role-playing game developed by Game Freak and published by Nintendo and The Pokémon Company for the Nintendo Switch. It is part of the eighth generation of the Pokémon video game series and serves as a prequel to Pokémon Diamond and Pearl (2006). The game was first announced as part of Pokémon's 25th anniversary event in February 2021, and was released worldwide on January 28, 2022.

The game follows the protagonist, sent to the past, as he travels to the Hisui region based on the island of Hokkaido at the start of Japanese colonization. Centered on exploring several open areas of the region populated by Pokémon, the game's objective is to complete a roster of the region's Pokémon, known as a Pokédex. Pokémon Legends: Arceus received generally favorable reviews and was a commercial success, having sold over 12 million copies.

The action of Pokémon Legends: Arceus takes place in the Hisui region. Logically, this means nothing to you even if you know the previous games, but there is a trick: Hisui is the old name of Sinnoh, which we know well since that is where the adventures told in Pokémon Diamond and Pearl (2007, DS) which has just been released on Switch under the name of Pokémon Sparkling Diamond and Sparkling Pearl (see the test next page). In fact, this new episode tells the beginnings of the saga, "at a time when human beings and Pokémon rarely lived in harmony", explain the developers.

Watch out for rabid pokemon

In Pokémon Legends Arceus, there are no trainers yet like in the usual games. On the other hand, there are the researchers of the Galaxy group (of which the hero is a part), who study the region and in particular its Pokémon.

There are also guardians, whom you will often come across: they are people responsible for watching over the monarchs, special Pokémon who have received a mysterious blessing. Among the latter, there are precisely enraged monarchs, recently uncontrollable. This is your mission: to understand and solve the problem!

While turn-based remains at the heart of Arceus Legends battles, they are more rhythmic and lively. Already, there is no transition to an arena: we launch a Poké Ball and the duel starts live! Then, several factors (including Pokémon stats) determine the number of actions each can perform, as well as their order.

For example, you can heal your Pokémon immediately after launching an attack! Finally, the fights against the powerful monarch Pokémon are special: you have to calm them down with pacifying balls that you can only create by knowing their favorite ingredients. That's a lot of new stuff...

You have something to take care of

Battling Pokemon and filling the Pokédex (with special tasks to complete) should keep you busy. But if you have time left, that's good: Arceus has everything planned! Make objects like blinding bombs or Masse Balls thanks to the workbenches of Rusti-Cité (the city) and bivouacs, go to the Maison du Textile or the Capillary Art, treat yourself to a photo session with the Photographer. There's plenty to do, including admiring the Pokémon you've caught at the Pasture Ground, since you can only carry six of them.

An open world to explore

Until now, Pokémon games certainly offered freedom, but each time in a well-defined area. Things change with Pokémon Legends Arceus, whose huge map is open-ended like The Legend of Zelda: Breath of the Wild. It is therefore possible and even recommended to explore everything, moreover for that you can count on three special Pokémon which serve as mounts Cerbylline on land, Paragruel on sea and Gueriaigle in the air!

Gathering the strongest Pokemon in Pokemon Legends: Arceus is a surefire way to build an unstoppable team. However, catching all of the Legendary and Mythical Pokémon in the game isn't enough. Those looking to get the most out of their newly acquired creatures will need to consider their stats and Nature, the latter of which can be changed at any time. using special natural mints.

Discover: Pogomap: Find Pokemon near you for Free & MultiVersus: What is it? Release Date, Gameplay and Information

Read also : Guide 2022: How to play Pokémon Go without moving from home? & PGSharp Pokémon Go: What it is, where to download it and more

How to get all Legend Arceus Pokémon?

To catch Arceus, you will need: To have collected the Azure Flute (complete the quest "The Pokémon worshiped as a god") To have caught all the Pokémon in the Pokédex (Darkrai and Shaymin not included)

Where to find Pokémon in Pokémon Arceus?

Travel to the Temple of Sinnoh atop Mount Coronet in the Coronet Highlands. Defeat Arceus (same principle as Monarch Pokémon).

Where to find rare Pokémon?

Arceus, the game's legendary namesake, can be caught at the Temple of Sinnoh in the Coronet Highlands. To catch this Legendary God-Pokémon, players will need to complete the Hisui Region Pokédex after beating the game's main campaign.

How to get Manaphy?

First you will need in your team 3 specific Pokémon, Musteboué, Babimanta and Qwilpik (yeah, you will have to do the mission with Pokémon slammed on the ground). For the rest of your team, I advise you to take Pokémon powerful enough to facilitate your quest (Level 50-60).

How to get Darkrai?

Once you've watched the end credits of Pokémon Arceus, return to the village of Rusti-Cité and you'll have a new request to accept called "A Dark Nightmare" which leads to an encounter with Darkrai.