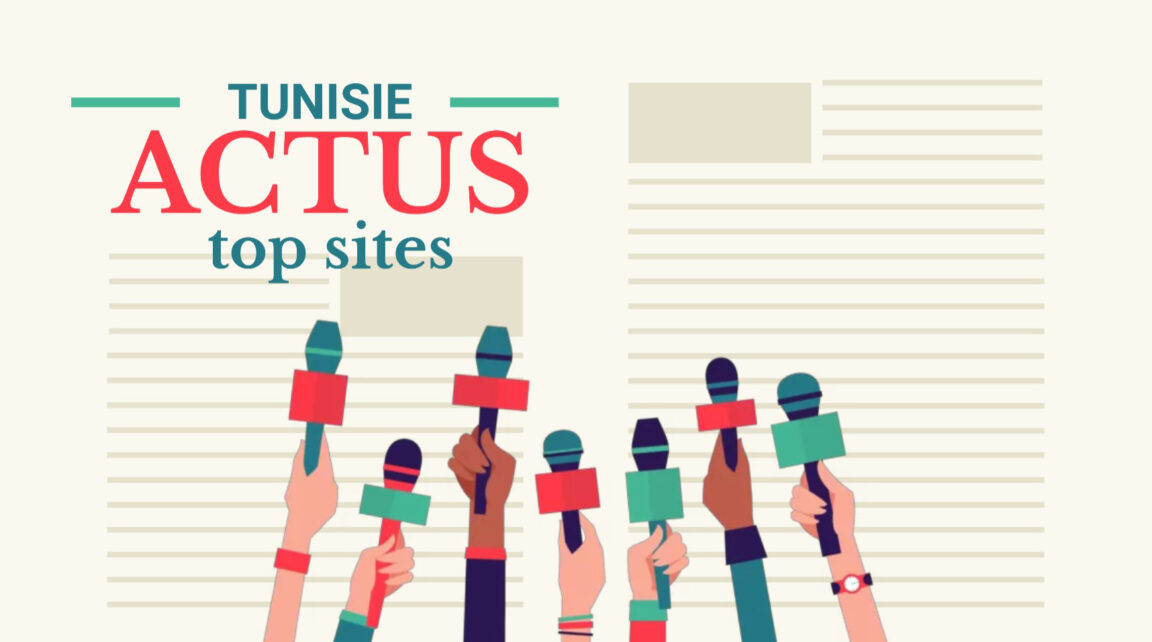 Tunisia News: 10 Best and Most Trusted News Sites in Tunisia

Ranking of the best news sites in Tunisia: Staying on top of the news and avoiding FAKE News is a big deal for many people. Back then, people read newspapers and listened to newsletters to stay informed, but nowadays we have our computers and smartphones giving us all the news and updates in one place.

So, there are tons of Tunisia news sites available on the internet and most of them are good, but in this article we have selected the top ones. Top Most Trusted News Sites in Tunisia to follow the news in Tunisia 24/24.

The web in Tunisia is overflowing with competing news sites, whether generalist or specialized in one or more themes (news, politics, sport, culture, music, automobile, etc.).

Because yes, other than social networks, news sites in Tunisia are also found among the most popular and reliable sources of information.

The sites on the following list are general or specialized news sites in Tunisia, classified according to the notoriety, the audience, the presence and the quality of the content offered.

To help you identify reliable media, here is the list of the best and most reliable news sites in Tunisia :

Most of the sites you see on the list were added to this list because they have earned a solid reputation for objective, non-politically motivated reporting.

Of course, reputation is something that is always contested and constantly evolving. It cannot be easily quantified (although I have cited sources before) and people will always have different opinions.

Read also : Best Clinics and Surgeons to Do Cosmetic Surgery in Tunisia & 72 Visa-free countries for Tunisians

That being said, if you disagree, take the comments and (civilly) tell us why.

The Internet has taken on an increasing role as an information medium, and as such raises many questions. These are largely motivated by the desire to better define its role as an interface between a public space in possible reconfiguration and cultural and media industries in touch with significant economic and technological developments.

In such a context, the nature of online information, and in particular the diversity of media content offered to Internet users, becomes a central question: the arrival of new players in the field of information (industrialists from other sectors, amateurs benefiting from the facilities of digital expression) lead to increased originality or, on the contrary, to a certain redundancy in the news? In other words, when it comes to online information, is quantity synonymous with quality? The question of information pluralism, and its fundamental challenges for democratic life, is thus posed again freshly with the Internet.

Indeed, the web undeniably constitutes a potential place of pluralism for information. Several researchers have been particularly interested in what amateurism could bring to online information, through the study of blogs (Serfaty, 2006), or by questioning the relationships between bloggers and journalists (Reese et al., 2007). Affirming that journalists are no longer the sole masters of the online media agenda, Bruns (2008) is one of the most cited authors on this subject.

According to him, the gate keeping would have made way for a gatewatching : Contributing Internet users have acquired a capacity for collective mobilization capable of influencing the choices made by journalists in the selection of information. In the same perspective, the supposed interactivity of the internet is seen as a factor contributing to putting democratic debate and political expression at the forefront of media information.

This would then allow the citizen to form an opinion on the social world, possibly to take part in a political engagement.

The internet, however, far from a " peaceful market-place of ideas », Constitutes an arena where different actors compete for access to a media platform. The content offered to Internet users is first and foremost the result of the work carried out by the players in online information. And they are very often linked to the sources that constitute the communication services of organizations and press agencies.

To read : E-commerce - The Best Online Shopping Sites in Tunisia & E-hawiya: All about the New Digital Identity in Tunisia

This logic of the media system, resulting in a fairly classic situation of "circular circulation of information", is made even more complex on the Internet: faced with the success of infomediaries such as Google News, the policies of the various publishers are ambiguous, even ambivalent, bringing together the questioning of a competition considered unfair and almost obsessive concern for good SEO, all weighing on the nature of the content thus produced

The growth of fake news

The proliferation of " false information ”Or“ infox ”on social networks has caused a lot of ink to flow in recent years. Accused of influencing the vote of voters in polls in the United Kingdom, the United States but also in Tunisia, they aroused fears and indignation. Disinformation on the internet is not a new phenomenon, however.

For several years now, the term fake news is frequently mentioned in public debates and seems to be mobilized by a great diversity of social, professional, activist or institutional fields.

What appears to be a portmanteau has, in a very short time, taken over public spaces to characterize social phenomena that are nevertheless highly heterogeneous: elections and referendums with “unforeseen” results, resurgence of acts of terrorism, geopolitical context perceived according to categories. inherited from the "cold war", contestation of official expertise during multiple socio-technical or socio-scientific controversies, etc .;

In Tunisia and in a large number of countries, news sites and social networks are now one of the main entry points for Internet users to news, and even the first source of information for 18-25 year olds, all media. confused.

However, social networks, and Facebook in particular, were not designed to disseminate current information. Operating according to affinity logics, they redefine the relationship with sources: on Facebook, we trust the person who shared information more than the source itself.

This logic would also push Internet users to shut themselves up in “ideological bubbles”, where information would be brought to their attention which confirms their opinions (because they are shared by their closest friends). It is in this very specific “information ecosystem” that “false information” spreads.

Another particularity of the fake news phenomenon relates to the industrialization of the production of political rumors, itself driven by the economic models of social networks. Large web companies generate income through the advertising they host: the more time Internet users spend using their services, the more they are exposed to advertising and the more money they earn.

In this context, fake news constitutes particularly “engaging” content, ie it captures the attention of Internet users and makes them react. Large platforms could thus be accused of promoting false information and conspiratorial content via their recommendation algorithms, in order to generate more advertising revenue.

This is for example the case of YouTube Kids, service however intended for children from 4 years old. Social networks can also be transmission belts for producers of "fake news" who seek to reach a large audience. During the 2016 American election campaign, the media Buzzfeed thus realized that nearly a hundred sites disseminating false pro-Trump information had been created by teenagers in Macedonia.

By hosting advertising on their own sites and using Facebook to target certain audiences in the United States, they have brought American internet users to their sites in droves and generated substantial income.

Last specificity of the phenomenon: the use of false information for purposes of political propaganda, in particular on the part of the blogospheres of the extreme right. In the United States as in Europe, fake news is indeed very marked ideologically.

During the 2017 French presidential campaign, for example, false information claiming that singles will have to welcome migrants into their homes, that Emmanuel Macron intends to remove family allowances or that Christian holidays will be replaced by Muslim holidays were shared. on Facebook (several hundred thousand times for some).

In Tunisia, during the elections between 2011 and 2019, several political parties bought or rented Facebook pages, news sites and even radio and TV channels to disseminate propaganda and false information on other parties.

In this context, sharing false information takes on a political dimension where, even without believing in it, Internet users seek to express a critique of political and media institutions or to assert their membership in an ideological community.

The extent of the fake news phenomenon in Tunisia is therefore above all linked to a climate of political mistrust.

In this context, media education, because it offers a fundamental reflection on the value of information, while addressing a particularly exposed audience, constitutes an important part of the answer.

But it must also adapt to the characteristics of new information environments: integrate an economic dimension to understand how the functioning of the advertising market promotes it, teach the description of technical infrastructures (such as algorithms for search engines and social networks) and educate for debate to show how information appropriation mechanisms are dependent on social contexts.